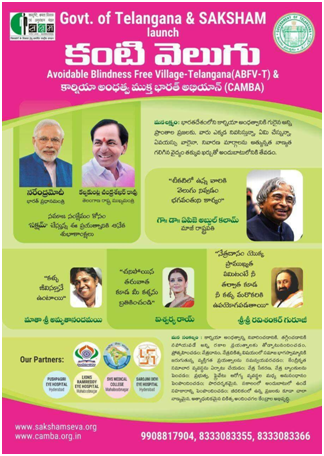 We are happy to bring to your notice and hereby submit to you that a silent revolution in Telangana villages is taking place in the field of Blindness Control in the name of Cornea Andhatv Mukt Bharat Abhiyan, a program of Samadrushti Kshamata Vikas Evam Anusandhana Mandal – SAKSHAM an NGO working for the control of Corneal Blindness in India. We found interesting results from the scientific survey they have taken up in more than 180 villages of Mahabubnagar District in Phase 1, Eye camps conducted based on the survey results and the surgeries performed after motivation through the program.

Our department officials have consulted the team of the NGO and have planned to give it a bigger and better role and support the state of Telangana. We have together conducted a National Workshop called “Avoidable Blindness Free Telangana” and “Let’s Talk Cornea” on 25 th June 2017. This was conducted to delve deep into the findings and also to understand the methodology.

It was also a learning and catalyst for our staff. The Telangana Ophthalmology teams participated in the workshop. 10 district program managers and optometry staff of the RBSK program got enthused by the programme. More than 160 participants from all South Indian states participated.

In the workshop, a discussion and a brainstorming session on how to take the initiative forward concluded in the formulation of a scientific method “Kanti Velugu Project” in 10 pilot districts of Telangana State on the lines of “Open Defecation Free Village (ODFV)”. 525 Village Panchayats would be taken up in the year 2016-17 and at the end of one year they would be declared as Blindness Free Villages.

A series of scientific surveys by Village teams and Netra Rakshaks, followed by two rounds of eye camps and a structured referral system for surgeries to the Government Hospitals and also to the NGOs shall take place.

We will involve SAKSHAM, a voluntary organizations who has Netra Rakshaks (Sight Keepers who are voluntary workers) and District Level Sight Ambassadors (who are paid workers) and government machinery at the grass root level like sarpanches, ward members, ASHAs, AWWs, school teachers and all other SHGs would be involved in the survey. The screening camps will be organized by SAKSHAM with the support of Government and other NGOs. Persons identified will be taken to either district hospitals, DBCS or Tertiary hospitals like Sarojini Devi Eye Hospital, Pushpagiri Eye Hospital, Regional Eye Hospital in Warangal etc.

The patients will be provided follow up care too. Efforts will be made to provide spectacles to persons with refractive errors and devices for Low vision. All this would be through a state of the art software and analytics platform that would be developed for the “Kanti Velugu Project” under the aegis of National Programme for Control of Blindness and Visually Impaired (NPCB&VI).